I thought, for the first post of the New Year, I would focus on THE major item that has shown the crass stupidity, and complete lack of self-awareness, that seems to be the hallmark of a certain kind of ‘climate’ scientist and their naive camp followers. 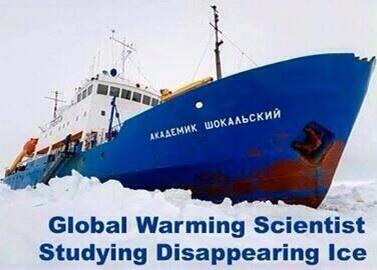 Needless to say, I am referring to the Christmas Pantomime known as The Great Spirit of Mawson Debacle. I won’t bore you with the details as I’m sure those of you with even a mildly-sceptical eye will have recognised the huge irony inherent in the situation. A team of Global Warming scientists visit an inhospitable part of the planet to prove Global Warming is impacting the environment in that area.

Just in case this is all news to you, here is a range of items via Gargle.

It seems these people were so wrapped up in their own little world that the recent historic increases in ice extent around Antarctica, repeatedly listed on websites around the blogosphere, made no impression on them. They were so blind to the possibility that their beliefs may be wrong, they appeared to have assumed that they would sail into thin, or non-existent, ice and could then claim that all the bullshit we have had to suffer over the last few decades was another piece of ‘settled’ science.

I could have picked any number of pieces to fill this page but I’ll just provide one link and a copy of a comment buried deep in the comments section of the page.

Can we please drop the misconception that this jaunt had anything to do with “science”?

It was, from beginning to when it went pear-shaped, a propaganda exercise designed to counter growing climate skepticism, run jointly by Twerkey, the University of NSW (UNSW), the BBC and the ABC, with backup from the Guardian and Fairfax newspapers.

The UNSW provided $1.5 million in seed capital. Twerkey provided the pseudo-scientific veneer, the ABC provided the technicians – camera operators and sound technicians, and the BBC provided one of their chief talking heads as “anchor” – one Andrew Luck-Baker. Given this guy is the BBC’s latest incarnation of Sir David Attenborough, you can safely assume he had his own hair stylist and make-up artist on board as well. Plus a twenty-something “research assistant”.

Also on board were journalists from the Guardian and Fairfax – more of them later.

There is never enough money for these block-buster extravaganzas – just ask George Lucas. Plus they needed some “extras” to be filmed doing “scientifical” things in the background, while Luck-Baker interviewed Twerkey in different locations, discussing dying penguin colonies and receding sea ice, and all manner of things that “proved” climate change.

So Twerkey hit on the idea of advertising for PhD students, science teachers and the like, to pay their own fares (or more likely, for their faculties to pay for them out of public funds), so they could be unpaid TV film extras expedition research assistants. The response was so overwhelming Twerkey had to employ taxpayer-funded professional explorer Greg Mortimer to vet the applications and pick the “best team”.

Those lucky enough to be amongst the “Chosen Few” paid between $8,000.00 and $19,000.00 each, for the privilege, the amount depending on how much of the voyage they were partaking in – it was apparently broken down into “legs”.

The end result of all this was meant to be a BBC documentary on the “Effects of Climate Change on Antarctica”, which would be screened jointly by the BBC and the ABC. Obviously advance publicity would boost audience viewing numbers, hence the presence of the Guardian and Fairfax reporters, who were supposed to provide a continuous supply of articles for the print and online versions of their respective newspapers.

How do we know all this? Because the ABC, the BBC, the Guardian and Fairfax were running stories on this “largest and most expensive Australian Antarctic Expedition ever”, fully a month before it ever left. Only back then they were all “climate scientists”, not “passengers” or “tourists”.

To the best of my memory, this is the largest, most blatant, fraudulent misuse of public funds in my lifetime. That they were funds allocated from the Education Budget at a time when we are being asked to throw even more billions into that socialist-controlled cesspit just makes it even more astounding.

That this fraud was an attempt to use Australian taxpayer’s funds to produce a climate change propaganda film to be used by the ABC and BBC, both publicly-funded bodies themselves, just adds to the indignation. That the effort has now led to the ruination of not one, but three countries’ Antarctic research for this year, simply heaps on more shame. That the entire disgusting sham was hidden from public view by outright lies propagated as “news” by the ABC, adds a completely new dimension to the concept of dishonesty.

But as outstandingly disgusting as all those facts are, none of them represent the absolute bottom of the sewer. That place is indisputably reserved for the members of our duly elected “conservative” government, who individually and collectively have managed to remain totally silent as all this has unfolded. Ten days of drama and revelation of wrongdoing involving millions of dollars and with ongoing international ramifications, and not so much as a peep.